If you are making the switch to Gmail, the first thing that stands out is that although Gmail is very responsive, it is pretty unattractive web application to use. There are plenty of modifications you can make to your browser to make Gmail look better, but I thought I would focus on modifications that strictly work in all browsers. Here are a three modifications that I think improve upon the standard Gmail interface.

A couple of months ago, I decided it was time to build my own home file server instead of purchasing cheap servers from Dell and HP. I was never quite happy with what I got. The Dell boxes were too loud and the HP one was too underpowered. A build-your-own server is not exactly cheap either, so if saving money is your top concern, I would probably recommend against it. My new home file server ended up being exactly what I wanted, a fast Intel Xeon based server that is super quiet and easily upgradeable. I’ll usually get bored and decide to change something, for the sake of giving me something to do. Now on to the software side of things, I had decided to put Windows Server on this machine. My previous server was Windows 2003, and as much as it was functional, the operating system was starting to show it’s age. With time, Windows 2003 is harder to install on newer hardware. It does not support SATA drives without specifying a driver and my particular version was not 64-bit. Who uses only 4GB of RAM these days anyway? The time had come for an upgrade. The choice came down between Windows Home Server 2011, Windows Server 2008, and Windows Server 2012 Essentials. I know some of you reading this, are shaking your heads right now and wondering why pay for another expensive Microsoft OS, when there are excellent choices like FreeBSD, Ubuntu, RedHat, and others. I did look into setting up Ubuntu Server, but for some reason Ubuntu no longer fully supports WebMin, which is something that I thought would be something I would like to have. The other choice was to go with Windows 7 or Windows 8, but honestly, I really prefer to have a file server os.

Microsoft is a company in decline these days. Their consumer products are not really cool or exciting anymore. Where Microsoft still shines, I think is in their file server and enterprise products. Though they are expensive, their ease of use and feature set is still hard to match. Windows Server is still a great server, but the Microsoft way of doing things is looking harder to justify in terms of dollars. For home servers, Microsoft threw consumers a bone with Windows Home Server, but they never really invested themselves. I think a $200 operating system is just about right for this market, however, Windows Server 2012 Essentials is not that product. It is around $400 to buy an OEM license and so it is hard for me to recommend to average home users. Nonetheless this is the product I chose, just because Windows 2008 Server was not cheaper and I figure Essentials would end up supporting my hardware better than an older os.

Once I got past the Microsoft restrictions of Windows 2012 Server Essentials (there are quite a few), I came upon my other problem, which is the focus of this posting. You can’t really run Windows without some sort of antivirus product. The problem was that for Essentials, a what is suppose to be a cheap home business server, there was literally no antivirus that supported it! My preferred antivirus for Windows is ESET NOD32, but since Essentials is a server product, ESET wants you to buy a business license. I don’t understand why there are so few choices for antivirus products when it comes to Windows Essentials and Windows Home Server. These products are aimed at home users and small home office users and yet, every vendor points you to a 5 user business bundle. With ESET not being an option price wise, I started to look elsewhere.

Symantec had just released a version of Symantec Endpoint that supported Windows 2012 Server and you can actually buy one license from their website store. Symantec offers two versions of Endpoint: the normal enterprise version that can be managed centrally using their Symantec Endpoint Server product and a cloud version, which can be managed from a website that Symantec hosts. The cloud client did not support Windows 2012 servers, so that was a non starter. You can install the regular client and if you never install the Endpoint Server software, it still works fine. My experience with Endpoint was the same as what I have in the workplace, this product really is too complicated and slows down your machine. After working with it for a month, I ended up no longer using it. There was an issue with Endpoint that caused my Microsoft backups to fail.

Avira is another product that I tried to use. From my research, it seems Avira is the new ESET. It has a growing customer fan base and the price is affordable for regular Windows users. For business users, you still have to buy 5 licenses and although I found Avira as low as $22 per license, I still did not need 5 licenses. Most of my other machines at home are Macs and the only vendor I found that had a good Mac and Windows solution combined was ESET with their 5-user Family pack, but this does not cover file servers! I found Avira’s interface to be simple to use, but still preferred ESET NOD32. Overall, I think Avira would be my third choice, behind ESET and AVG.

This finally brings me to AVG. My initial research was that AVG has its critics, but overall, it is a good antivirus product. They offer several choices of products and one specific product for Windows file servers: AVG File Server Edition. The 2013 product line share the new Metro inspired tile interface. It is a little dark for my taste, I don’t think the color scheme is at all attractive for a desktop application. The main screen is pretty simple. On the right you have a Computer tile that you can click on to give you more options and information in regards to the computer. Underneath this there is a Remote Admin tile; AVG has remote admin options similar to all business class antivirus products, but you never need to bother with these if you just are running one server. On the top left, you have links to Reports, Support, and Options. In the screenshot below, I have 10 reports that I have not viewed. These are mostly your typical, “Your last scan occurred on…” and “Your definitions were updated on…”. 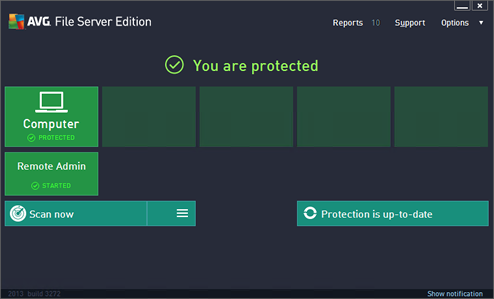 In general the interface is very simple and effective. Antivirus is suppose to get out of the way of your work and when you do want to look at it, it should be informative and easy to read. AVG does this quite well, except the dark color scheme, I really can’t find too much fault with the interface.

When you click on the Computer tile, you get the Computer protection screen. Here you can see that the Antivirus is enabled, access more Settings and view Stats. 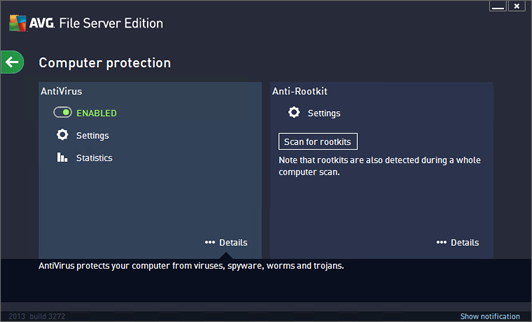 Performance wise, AVG did not slow down my file server like Symantec Endpoint. It scans files faster than Avira. It is still an antivirus, so there is a difference between running Windows without it and with it. When using file explorer my folders would open instantly, with AVG, you do notice a slight hesitation, so you are sacrificing some small percentage of performance for security.

Price wise, AVG File Server Edition is $40 for a single license, which you can buy directly from AVG. There is no annoying 5 business user license requirement. You can also find it cheaper by buying it through another reseller. I was able to find a great deal through the Dell Software store.

Other antivirus that I wanted to try were Bitdefender, Avast!, and Vipre. The most common reasons for not choosing these vendors and others, was the lack of information on Windows 2012 Server support, the 5 user business license requirement, standalone price, and the general lack of trailware versions available for business editions.

I really can’t see myself using any other antivirus other AVG File Server Edition. No other vendor provides a reasonable solution for home server customers at this time.

Webmasters undeniably rely on web site statistics to give them a clue as to how their respective sites are doing. Statistics become important in evaluating site changes and even adding new content. For the do-it-yourself webmaster, clear and easy to use stat packages become a necessity, so obviously you want to pick the right web stats program for your site. Your choices range from web services like Google Analytics, to programs that analyse your webserver logs, such as AWStats, or you can choose a script that concentrates on what your web site activity is at the moment. Mint concentrates on just the essential statistics you need, in this way it is a good stats program for webmasters who are not interested in long term analysis. Bloggers in particular will find Mint to be a good alternative to AWStats or Google Analytics, since it can be integrated with most major web blogging scripts like WordPress. If however you are in the need of more in depth reports or eCommerce tracking, then Mint is not for you.

There are two ways to setup Mint. You can simply add a single line of javascript code to the head tag of your html, or in the case of WordPress, to the header.php template file. The advanced method requires that you have PHP installed as an Apache module and is harder to implement if you are not an experienced webmaster. Since Mint requires javascript, it is unable to track any visits if javascript is disabled. This is usually not a problem for most people, since javascript is now a pretty common requirement. At the time of this writing, Mint also requires Apache, PHP, and MySQL in order to run properly. Most Linux and UNIX based web servers will satisfy these requirements, but Windows servers will not work. Even with all these stipulations, I still found Mint to be an interesting and worthwhile investment.

For $30 per domain, Mint can provide real time stats and unlike other stat packages, it totally ignores bots and spammer scripts. This gives you a more accurate picture of actual hits on your site. Compared to other stats packages, I would say Mint is actually more conservative about hits. On the other side, the standard Mint stats are not very spectacular, fortunately, Mint is expandable. Its plugin architecture allows for new search panes to be added to the standard Mint stats view. These plugins are referred to as peppers. I highly recommend XXX Strong Mint, Sparks!, and Fresh View. You can find more peppers on the Peppermint Tea page.

If you run WordPress and use ShortStat, you might be wondering if Mint is worth the price of admission. The advantage of Mint is that you can track static html pages as well as your WordPress blog. Other than that, the other big difference is that ShortStat registers way too many hits from search engines and bots as regular hits. Mint is more accurate or you might say conservative in its hit tracking. In my opinion, if you receive moderate traffic above fifty actual hits from actual visitors you probably could benefit from Mint. Technically, thirty dollars is not a lot of money these days, so Mint is a pretty good value considering how much commercial web site tracking software costs.

WebKeyDesign uses cookies to ensure that we give you the best experience on our website. If you continue we assume that you consent to receive all cookies on all WebKeyDesign websites. More Info